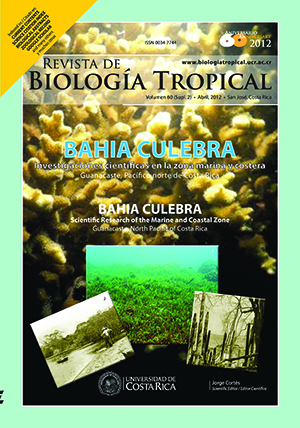 The coral reefs are one of the most diverse ecosystems in the planet, not only because their reef-building species but also because of the species that live above, on, inside and below them. Corals of the genus Pocillopora are recognized globally by harboring an important fauna of invertebrates among their branches, many of those considered obligate symbionts. The present investigation describes the fauna of invertebrates associated with the reef-building coral P. damicornis in Bahía Culebra, Costa Rica, their densities, frequencies, richness and diversities from 2003 to 2004. Five coral colonies were collected every 3-4 months at Playa Blanca within Bahía Culebra. A total of 448 individuals in 35 species were found: Harpiliopsis depressa, Trapezia ferruginea, Alpheus lottini, Fennera chacei, and Petrolisthes haigae, and the bivalve Lithophaga aristata, the predominant species. November was the month with the highest richness, diversity and taxonomic distinctiveness, while August had the lowest values. In general terms, the rainy season showed greater richness of species than the dry season. The species collected and their densities and abundances were similar to other sites along the Eastern Tropical Pacific. Bahía Culebra has been losing coral cover, which could have consequences on the diversity and abundances of associated corals organisms. These consequences include loss in the fertility of those organisms, a reduction in its function as cleaners and protection from coral predators, putting in risk their diversity, affecting the stocks of predatory fish that depends on them. Carrying out permanent monitorings of the associated cryptofauna of the coral Pocillopora is crucial to quantify losses or recoveries in the composition of associated invertebrates, and therefore in the functions that they perform in this ecosystem.
https://doi.org/10.15517/rbt.v60i2.19965
PDF (Español (España))