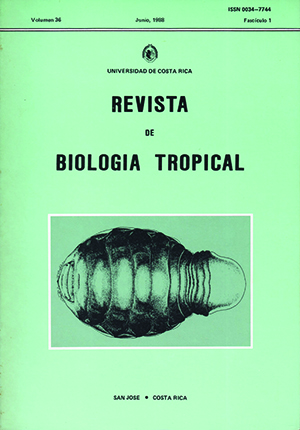 The phenology of the aroid Xanthosoma wendlandii (Schoot) Standl. was studied on several populations in the Pacific drainage in Costa Rica. The species survives the severe dry season (December to April)
as corms and seeds. Above-ground parts appeared after the first showers of the rainy season in May (Fig. 1).
Plantlets did not reach adulthood in one season and it probably takes several years to complete development. Adult foliage was different from juvenile (Fig. 2 and 3); blooming extendend from late June to late September and mature fruits were observed in late July and October.
Inflorescences were visited by species of scarab beetles of the genus Cyclocephala, which appeared to be the main pollinators.
Low seed production might be a characteristic of the genus Xanthosoma, while other aroids from the
same areas, like Dieffenbachia oerstedii Schott and Philodendron tripartitum Jacq., produce large numbers of
viable fruits.