Flesh flies species (Diptera: Sarcophagidae) from a grassland and a woodland in a Nature Reserve of Buenos Aires, Argentina 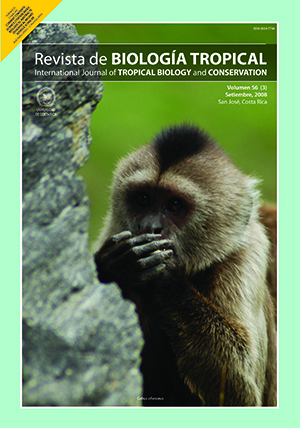 Temporal changes of flesh flies abundance were simultaneously recorded at monthly intervals during a year in a woodland and in a grassland at the "Reserva Ecológica Costanera Sur" (RECS), Buenos Aires city, Argentina. Samples were taken at monthly intervals (February 2004-January 2005). Hourly captures of adult flies (10:00 am - 04:00 pm) were taken each sampling date with a hand net. Temperature was recorded at each hourly capture. The baits used were 200 g of rotten cow liver and 200 g of fresh dog faeces. Records of abundance included only species whose abundance was =30 individuals accumulated during the whole sampling period. Considering overall abundance, a non-parametric Chi-square test was used to estimate deviations of an expected habitat and bait preference ratios of 1:1. The same criterion was applied to include species in a contingency table to describe their seasonality. The final matrix included four species whose associations to seasons were analyzed by using a Correspondence Analysis. To normalize the data, a log 10(n+1) transformation was applied prior to the analysis of correlation. Pearson product-moment correlations were used to examine the relationship between flesh-fly abundance with temperature and habitat preference. The entire sample accumulated 1305 individuals and 18 species. The flies were more abundant in the grassland than in the woodland. Microcerella muehni, Oxysarcodexia paulistanensis, O. varia and Tricharaea (Sarcophagula) occidua exhibited the higher relative abundance, representing the remaining species less than 8% of the entire sample. Most of the recorded species showed preference for faces as bait. Concerning the dominant species, all of them but M. muehni, a suggestively termophobic species, prevailed in late spring-summer. The observed species arrangement at both sites indicates low species diversity and equitability and high information per individual in the average. The referred community traits would indicate the possible effects of environmental disturbance due to the proximity of study sites to dense urban settlements.
https://doi.org/10.15517/rbt.v56i3.5710
PDF