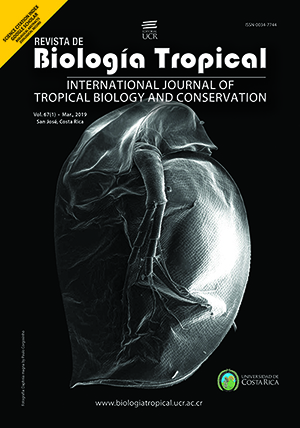 Phytoplasmas (class Mollicutes) are causal agents of plant diseases with an economic impact on crops or threatening local biodiversity. A survey was conducted from 2012 to 2016 on infected Catharanthus roseus plants that exhibited symptoms reminiscent of phytoplasma infection throughout Costa Rica. A total of 73 plants were collected exhibiting symptoms such as virescence, phyllody, axillary proliferation, little leaf, leaf malformation, chlorosis, or yellowing. All samples were tested by nested PCR using phytoplasma universal and specific primer pairs. Phytoplasma infection was detected in 52 (71.2 %) of the plants collected. Phytoplasmas of six subgroups belonging to 16Sr groups I, III, IX, XIII and XV were identified based on sequencing and in silico RFLP analyses. ´Candidatus Phytoplasma asteris´ (16SrI) was the predominant group among the positive samples (n = 30) showing variety of symptoms and wide distribution from sea level to ca. 1 400 masl in six of the seven Costa Rican provinces. Group 16SrIII was the second most abundant (14 samples); and the remaining three groups were seldom found in C. roseus (8 samples). Moreover, group 16SrXIII phytoplasma was detected for the first time in the country. To the best of our knowledge, this is the first report of natural infection of C. roseus with phytoplasma subgroups 16SrI-B, 16SrI-P, 16SrIII-F, 16SrIX-F, 16SrXIII-A, and 16SrXV-B in Costa Rica and Central America.