Stability and reliability of the new corn hybrids in comparison to the regional control HB-83, 1998-2000.

study was conducted to estimate the stability (AMMI) and the

confidence or normalized response (RNI) for a white corn

hybrid, assessed in a regional PCCMCA corn trial from 1998 to

environments at nine Central America and the Caribbean

probability increase over the mean yield, specified by a control.

The study allowed to identify genotypes with low environment

interaction and of normalized response varying from good to

stability and the confidence degree, regarding to the regional

control HB-83, was determined every year. In addition, the

same analysis was performed with 12 genotypes in common at

least in two year of this phase. The combined analysis indicated

showed standard RNI, outstanding the H-59 and CB-HS-9 with

12 and Trop E 103 were identified as hybrids with low

genotype-environment interaction by the AMMI analysis. Both

current regional control due to its high production and good 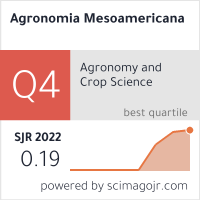